“Don’t tell me where your priorities are. Show me where you spend your money and I’ll tell you what they are.” 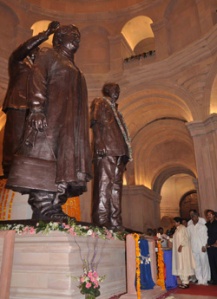 These lines aptly describe the governance of Mayawati in most populous state of the country Uttar Pradesh. She recently inaugurated 685 crore Noida Memorial Park and used the platform to settle the scores with her political rivals. Mayawati has special love for these parks and she has spent thousand of crores on building these parks. She has even said that if she gets fresh mandate she would like to have such parks in each and every district of UP. But the basic question remains that does the parks in any ways solve the problems being faced by the people of the state. A state which has shortage of power, schools, infrastructure, industries, hospitals, road networks, etc would have been happy if these problems would have been addressed. She brazenly says that she has spent just 1 pc of the budget on the park. This would have been ok if the remaining 99 pc would have been spent on the welfare measures and development of the state. But sadly that has also not happened.

Now let me take you 750 km away from the park to Gorakhpur in eastern part of the state. More than 430 people have died of encephalitis virus and mostly children. This is not the first time that epidemic has struck in this part. It has been active for last 33 years and yet the state machinery and health dept has failed to check. The hospitals are overcrowded and there are no beds available for admitting new patients. At least 2 multispecialty hospitals would have come up with the amount spend on the construction of park. And even if they would have been named after Dalit icons or Mayawati herself it would have done a world of good for the people and state. This is where the chief minister has faltered. It is the simple case of wrong pririties. In her term also she is witnessing 4th outbreak of this virus and yet she and her government is as inefficient as it was a year prior. Now if someone tells her she says that she has been targeted for being a Dalit and would point out the mistakes of earlier govt. I wonder how long she can get away by giving these lame excuses and how long the people will fall prey to her reasoning. There is no denying that Dalits have been ill treated and it is very much required to uplift them but i have doubt if that can be done by building parks and installing own statues. They need more than just statues and CM who is self obsessed.

The point is that sincerity is missing and thus she has failed the people of UP. SARVJAN HITAY SARVJAN SUKHAY is as hollow as UTTAM PRADESH slogan of previous government. She was lucky to have got absolute majority in last polls and has golden chance to work for development of state but failed miserably. She had opportunity to work for oppressed section of the society by opening schools, improving connectivity, tackling law and order chaos, higher education, providing health care and employment. It would have helped in building better image of the state and would have established her credibility as a CM.

Apart from parks and her kitty she hasnt added anything significant in her tenure as CM of Uttar Padesh in last four and half years. I just hope that people of the state will look for someone who delivers on the development and solves core issues when they go out to vote next year.

This site uses Akismet to reduce spam. Learn how your comment data is processed.